Electronics is the study of the antics of electrons, for that first a bit of static electricity which is the way non moving electrons behave. 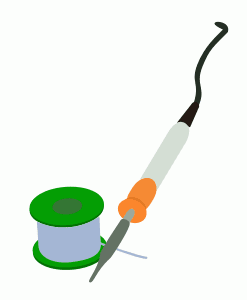 If you Rub a plastic comb or ruler on a dry cloth and hold it over very small bits of paper you will see the paper jump to the comb, this is electric charge an accumulation of electrons on the plastic comb which produced a field to attract the bits of paper.

All Charged matter try to reach ground potential an uncharged state, which is the state of earth, earth is taken as zero potential.

When the comb was rubbed on the cloth friction caused vibration in the molecules of cloth, vibration causes heat which dislodges the electrons and these collect on the comb.

Same static electricity is the cause of lightning bolts

and the crackling of your hair when you comb it on a dry day.
Insulators do not have free electrons but conductors have free electrons it is this reason the comb being an insulator could not stabilize its surface which had become charged, conductors like copper cannot get charged like this as electrons quickly distribute all over instead of accumulating on the surface. Conductors play an important role as they form the means to route the current formed by electrons to do work for us like lighting a bulb or running the Fan.
Electrons –
Like charges repel and unlike charges attract, This is because matter is assumed to be made of protons ‘+’ , electrons ‘–‘ and neutrons ‘0’ without charge.

The Ground that we walk on is made of mostly silicon dioxide or sand or quartz this silicon along with germanium and others are semiconductors, silicon forms most of the ICs in electronics. Selenium is another material but this is photoconductive, this is used in photocopying and printing. Gallium Arsenide is one other which is useful in high frequency components.

Most matters exhibit electrical properties piezoelectricity is one more, the long lasting gas lighter uses piezoelectricity (titanium derivative), these materials when hit generate electricity, this effect is used in record players (sapphire) to convert bumps on the record to electric voltages, batteries convert chemical energy to electric energy, and you know magnets produce electricity when moved over a conductor.

Certain organic compounds are also conductors, and water with some electrolyte like salt is also a conductor but this is ionic or electrolytic conduction.

Wet wood or cloth with impurities can become very conductive and to some extent air itself becomes a bit conductive if humidity is very high. (RH relative humidity is high means the moisture content of air is high, very wet air).
DC and AC Current –
Current is the movement of electrons in a material, direct current is DC and alternating current is AC. If electrons move in a single direction it is DC.

{ the movement of electrons is opposite of this but don’t bother about this was a bug fix done in those days :-) we all make mistakes }

A battery is the best example for a DC generator, The conventional current flows from higher potential + ve to lower — ve, the water analogy of this is the + ve terminal is an overhead tank and the negative terminal is the ground tank the pipe carrying water is the conductor/wire and flow of water itself the current.

Positive + (red) and Negative — (black) are called Polarities.
DC flows in a battery circuit as the battery by chemical reaction maintains one terminal with more electrons and the other with a shortage of electrons.

In AC the voltage or current alternates its direction periodically, in other words the polarities of the terminals change from + to — and vice versa with respect to time.

Why AC ? this is a fundamental law of nature, from the macro movement of planets in the solar system to the micro movement of electrons in an atom there is a pattern called the sinusoidal waveform or sine graph or sine wave.

The movement of a pendulum is the best representation of a sine wave, when a magnet is rotated in a loop (coil) of wires or a coil is rotated in a magnetic field (near a magnet), the voltage that is generated is AC.

As rotation is the fundamental mechanical motion, it is also used to generate electricity which you use at home, AC power which is produced by moving magnets and coils of wire (generator) with the help of water power (hydroelectric waterfalls), steam, fossil fuel (petroleum,coal) driven machines, to nuclear plants.

corporations, many believe when plotting a graph of profits or growth it is “up up and away” but the truth is that it is ” up and down then round and round” !!”

This is an old article i wrote, which may have errors or misconceptions, if you have any doubts verify with a Local Ham. If you want to study and learn the science yourself, then start here HyperPhysics.