BEAM is an acronym standing for Biology, Electronics, Aesthetics, Mechanics. While BEAM robots are often simple (consisting of a solar cell , motor, 2 transistors , and capacitor ), robots as complicated as 8-jointed, 4-legged walking spiders have been built using the principles of BEAM.

The BEAMAnt is a phototactic bot which has potentially complex behavior depending on the light level. It has two photodiodes for light sensing, and two antennae which switch the motors into reverse when they touch something. 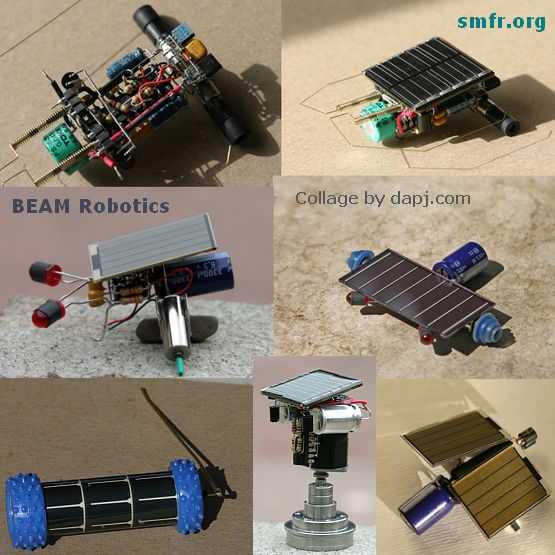 The basic BEAM principles focus on a stimulus-response based ability within a machine. The underlying mechanism was invented by Mark W. Tilden where the circuit (or a Nv net of Nv neurons) is used to simulate biological neuron behaviours. Some similar research was previously done by Ed Rietman in ‘Experiments In Artificial Neural Networks’. Tilden’s circuit is often compared to a shift register, but with several important features making it a useful circuit in a mobile robot.

TomboT – and the home of Liverpool Universities BEAM robotics

“Myself and some friends demonstrated to the University how simple robots can be built which provide an excellent learning platform, and as a result the University have changed the way they utilise their Year 1 lab sessions to include our robots”. – Tom Elner