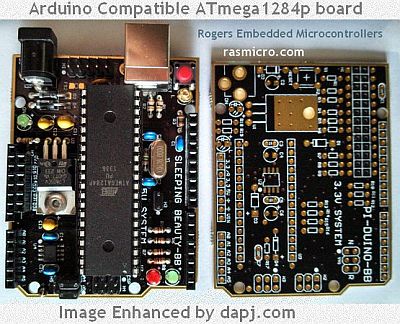 This page is intended to be a source of information for those interested in Motorola MC68HC05, MC68HC08, MC68HC11 and MC68HC12 Microcontrollers.

Six Digit LED Clock Display – The board is driven by a Maxim MAX7219 which has a serial interface; it can be controlled by a any microcomputer with a SPI or three output lines. The board is 2.75 inches by 6.5 inches in size; mounting four .8 inch LED displays and two .56 inch displays as well as six individual LEDs, a 7805, the MAX7219, and a five pin header.

The Sleeping Beauty is an Arduino Compatible board using an ATmega1284p.  The board was designed by Wayne Chu.  The size and function are the same as an Arduino UNO r3.

It has all the necessary components of an Arduino compatible UNO board but adds several devices useful for software development and education. These are briefly described below: