“For measuring distances I chose to use SRF08. It is an ultrasonic ranger with I2C bus and measure range from 3 cm to 6 m. The sensor has a beam width of 55 degrees (-6 dB points) and when mounted on top of one of the servos it can be used for covering well over 180 degrees.”

Servo System -Double Hitec HS-422 servos mounted on a special two axis brackets. – 5 pcs of normal RC servos with 50 Hz PWM control. ATMega16 at the expansion board creates the PWM for all of the servos and provides an I2C control interface for them. User space application running on beagle board can thus control the servos just sending only a simple I2C message. 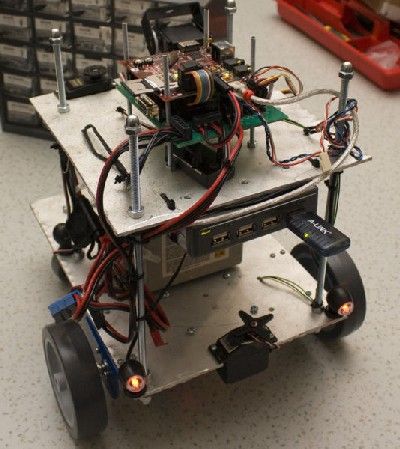 “The Beagle Board is a low-cost, fan-less single-board computer based on Texas Instruments OMAP35x processors featuring the ARM Cortex-A8 core”

The USB-powered Beagle Board is a low-cost, fan-less single board computer that unleashes laptop-like performance and expandability without the bulk, expense, or noise of typical desktop machines.

The BeagleBoard.org Foundation is a US-based non-profit corporation existing to provide education in and promotion of the design and use of open-source software and hardware in embedded computing.