NYC Resistor is a hacker collective with a shared space located in downtown Brooklyn. The NYC Resistor Microcontroller Mailing List is a great place to meet others with the same interest…

“In this hands-on workshop, you’ll learn how to use a soldering iron safely and effectively, and get plenty of practice with both soldering and desoldering techniques. We’ll be soldering up some Game of Life kits – LED tiles that generate nifty animations.” 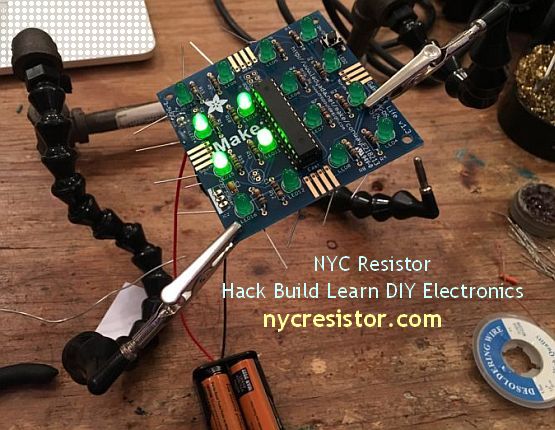 “We’ll learn to program an Arduino and interact with the physical world! This class covers an introduction to Arduino, including how to use light sensors, LEDs, buzzers, and more.”

“Turn almost anything into a musical instrument with Teensy, an inexpensive Arduino-compatible microcontroller. The Teensy 3.2 has a bunch of touch sensors and analog and digital inputs,..”