I fixed a China Torch with New LEDs and a Diode, it failed probably on a drop shock, the battery wire cut … then when put on charge Few LEDs went bad, as battery was absent in ckt. 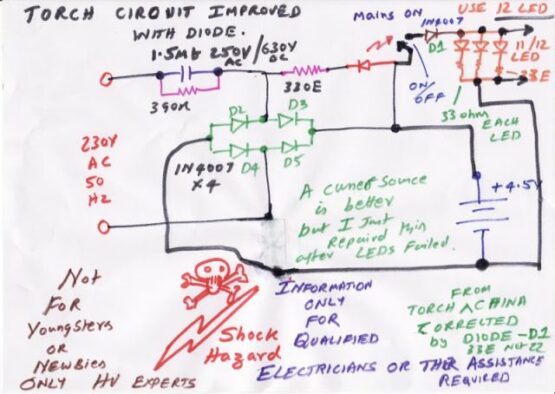 design review – 1.5uF voltage rating can increase like 440V AC. A current source with low dropout voltage would be great but it builds the cost. The wiring has to be robust. A diode added to keep LED current within some limits on battery overcharge.

These type of Torches and Lanterns should not be Turned on when charging. This may blow the LED Array. As long as the LEDs have a constant current flowing through them they are safe. It could be anywhere between 10mA to nearly 25mA depending on the type. LED Arrays can be in parallel or series or a combination of both. The datasheet has to be studied for the high current types.

Never subject these LEDs to a Reverse Bias voltage that is very high. It means reverse polarity. Never allow the current to go so high that it overheats the device, reduces longevity or even damages instantly at high current. These devices survive short pulses of high current. Hence PWM is a way to protect devices and arrays too.