Parallel-controlled circuits operate as self-controlled, variable resistors, connected in parallel to the load impedance (parallel loads). They react extremely fast and also control immediately pulses and very short mains break-downs, resulting from strong loads. These devices are preferably used in TV receivers, which have a B-class operated audio output stage. Without any parallel control the picture width is influenced inconveniently by the rhythm of speech and music. However not only in TV receivers a parallel control circuit is advantageous, but there are also a lot of applications requiring such a design.

The parallel control circuit can also be described as a “z-diode booster”, which offers, however, the great advantage, that the power dissipation of the control transistor can be reduced to a quart of that of a z-diode representing the same function. Thus the collector resistor can take the total parallel-load when the transistor is switched on. Supposing that half of the voltage is available at the collector, only half of the current flows through the transistor, power dissipation of which is only a quart of the total power consumption of the parallel load. The circuits 1 and 2 are proportioned for a parallel load of </= 6 W. In many cases the former is sufficient. It is characterized by a remaining control voltage of < 250 mV. The circuit no. 2 consists of two stages and improves the voltage control to about 20 to 50 mV. The small elaborateness of only one transistor and one resistor is advantageous in many cases. 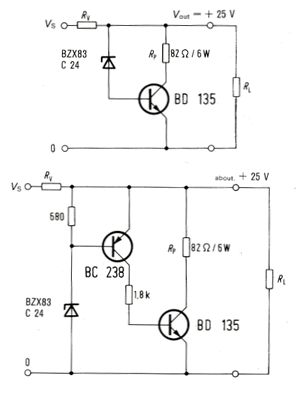 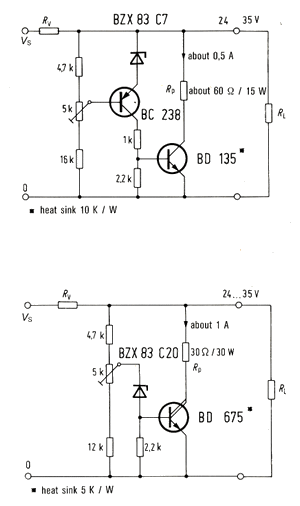 2020-02-15
Previous Post: e-Learning Resources – Physics at Exeter
Next Post: How to Use Your PC to Measure Temperature